How Hospitals Can Avoid a Costly Surprise From Unclaimed Property

Unclaimed Property Audits Are on the Rise 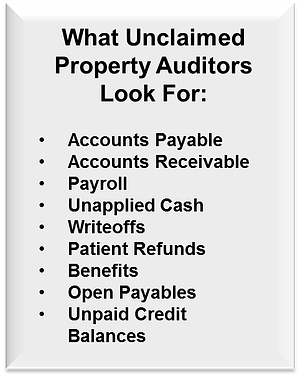 With budgets still tight in some areas, and tax increases highly unpopular, many state governments have revived their unclaimed property laws in order to raise much-needed revenue. To find unclaimed property, states often retain outside auditors on a contingency fee basis, which encourages these freelancers to go after industries that are most likely to harbor such property.

And health care is one of their targets.

Unclaimed property is typically defined as property that’s held or owed in the ordinary course of business that the owner hasn’t claimed for a certain period of time, which is known as the “dormancy period.” All 50 states and the District of Columbia have enacted such laws allowing them to collect unclaimed property. Because these laws don’t represent taxes, they aren’t subject to statute of limitations rules. Most audits cover periods dating back from 10 to 20 years.

Under unclaimed property laws, the party that holds the property must transfer the abandoned property to a state custodian after the expiration of the dormancy period. The period’s duration varies by state as well as by type of property (for example, unpaid credit balances or wages), but it usually runs anywhere from three to five years. Regardless of the state your hospital is in, the period always begins on the date of the last contact with the property owner.

Here’s an example: Suppose a patient makes a $20 copayment to a hospital’s imaging center for a mammogram on March 1, and it turns out that the mammogram is fully covered by the patient’s insurance plan. After a few months, the hospital determines that the patient’s payment is actually an overpayment, and a credit balance is created. If the patient can’t be found within the dormancy period, the $20 is considered to be unclaimed property, and is subject to remittance to the state.

Here’s another scenario … a hospital’s billing system is set up to record a $600 receivable for a certain procedure. Under a new contract that was entered into after the billing system was last updated, the insurance company pays the hospital $700. An auditor may identify that $100 difference as an overpayment and potential unclaimed property.

In such cases, the facility needs to either prove the $100 isn’t unclaimed property (a process called remediation) or risk that it will be counted as such when the auditor pulls out the hospital’s overall liability for unclaimed property in the audit period based on a sample drawn from potential unclaimed items.

For one thing, the facility needs to look beyond the state where it’s located because the relevant law and dormancy period will depend on the last known address of the property’s owner. The United States’ current health care payment model also complicates matters, as the example involving the $20 overpayment illustrates. Even if the credit balance may not have appeared on the books until May or June, the aging began in March — the date of the last contact with the patient.

When it’s determined that an account has aged out of the dormancy period, the facility must send a due diligence letter to the patient in order to return the funds. And, if a refund can’t be made, payment must be made to the patient’s last known state.

Don’t wait for the auditors to show up

Many hospitals have learned the hard way that seemingly trivial amounts of unclaimed property can quickly add up to thousands and even millions of dollars in liability to the state. So, don’t wait for the auditors to come knocking at your door — work with your financial and legal advisors to get your unclaimed property house in order.

If you have any questions about unclaimed property laws or any other issue pertaining to hospitals, give us a call at 716.847.2651, or you may contact us here.