Occupational Fraud: Could Your Office be at Risk?

In its 2012 Report to the Nations on Occupational Fraud and Abuse, the Association of Certified Fraud Examiners (ACFE) estimates that the typical organization loses 5% of its revenues to occupational fraud every year. The median loss in the ACFE’s survey of almost 1,400 fraud cases was $140,000, and more than 20% of these cases resulted in losses of at least $1 million.

The numbers are alarming, as few companies can afford such losses. Perhaps more surprising are the ACFE’s findings related to fraud perpetrators. The employees behind such costly schemes aren’t your average criminals.

Tone at the top

Although it’s easy to place the blame for occupational fraud on lower-level employees, research tells another story: 42% of the perpetrators in the ACFE survey were nonmanagement, but 38% were managers and 18% were owners or executives.

And, in fact, the higher the thief’s position in the company, the more costly the fraud. Owners and executives were responsible for losses that were approximately three times higher than managers instigated. For their part, managers rang up losses about three times higher than regular employees caused. The ACFE attributes such statistics to the fact that those with more authority have greater access to their company’s assets. They’re also in a better position to override internal controls. Not surprisingly, the study also finds that the amount of fraud losses increases with perpetrators’ tenure and education — which typically are associated with higher positions and greater trust.

Another important finding is that most occupational thieves aren’t career criminals. Of the 860 cases in the ACFE study (where information was available), only 6% involved a perpetrator who had previously been convicted of a fraud-related offense. And of 695 cases with information on the perpetrator’s employment history, 84% of them had never been punished or terminated by an employer for fraud.

Most fraud perpetrators turn to theft because they’re experiencing some type of pressure — at work, in their personal lives or both. The pressure could be financial — stemming from debt, addiction, gambling losses, poor investments, medical bills, divorce, or “keeping up with the Joneses.” Or pressure may come from supervisors with unreasonable performance goals or from company shareholders with high earnings expectations.

Frequently, occupational thieves are motivated by anger and dissatisfaction with their manager or the company’s leadership. Their anger may be fueled by a perception that management’s own ethics and integrity are lacking. In rare cases, perpetrators draw personal satisfaction from outsmarting their boss or the system.

The ACFE report makes several recommendations to employers that want to prevent fraud:

Set up fraud reporting mechanisms. Typically, this means a confidential tipline accessible to both internal and external sources. As in previous surveys, the ACFE report found that such tiplines were one of the most effective methods of catching occupational thieves.

Provide targeted fraud-awareness training. At a minimum, a qualified fraud expert should explain to employees and managers the actions that constitute fraud, how fraud harms everyone in the organization and how employees can safely voice their suspicions. ACFE research shows that organizations with antifraud training programs experience lower losses and schemes of shorter duration than those without.

Educate on the characteristics and behavior of fraud perpetrators. It’s important that managers and employees be able to spot red flags — and know how to report them.

No program can prevent all fraud, but following these tips should help you reduce its incidence in your organization. When you know how to detect fraud schemes, you can stop them quickly and thereby reduce overall losses. In addition, potential perpetrators may be more hesitant to steal if they know that management and co-workers are on the lookout for fraud and have the means to report it.

A little knowledge about fraud can go a long way, but companies can get themselves in trouble by acting too hastily on mere suspicions. Encourage your clients to retain fraud experts who have experience performing thorough and comprehensive investigations.

If you have any questions about fraud perpetrators or any other issue, give us a call at 716.847.2651, or you may contact us here. 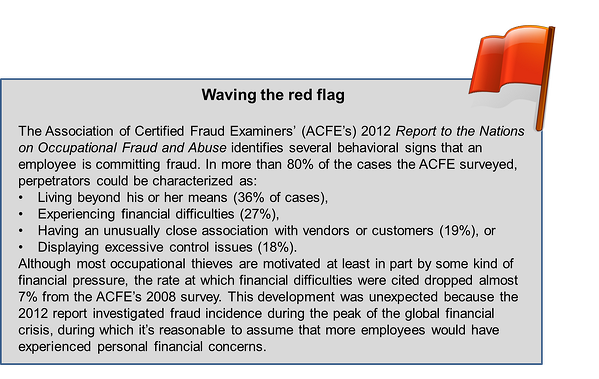