Recently, the IRS celebrated another victory in its long-running campaign to challenge family limited partnerships (FLPs). In Estate of Lockett v. Commissioner, the agency attacked an FLP for being an invalid partnership under state law. Ultimately, however, it was the decedent’s estate planning that undermined the FLP, thus handing the IRS another win.

Lois Lockett was predeceased by her husband, whose will established a trust for her benefit (Trust A). In 2000, as part of her estate planning, Lockett formed Mariposa Monarch, LLP under Arizona law. The partnership’s formal agreement, signed in 2002, named her sons Joseph and Robert as general partners. Lockett, the sons and Trust A were named as limited partners. At that point the parties hadn’t yet agreed on initial capital contributions or their percentage interests in Mariposa.

Shortly after the agreement was signed, Lockett and Trust A began funding Mariposa. Joseph and Robert never made any contributions. In 2003, Trust A was terminated, and Lockett became the owner of her limited partnership interest in the partnership. An amended agreement was executed to reflect this. The agreement continued to list the sons as Mariposa’s general partners, but an exhibit listed their mother as holding 100% of the partnership and each of the sons holding 0%.

When Lois Lockett died in 2004, Mariposa held assets worth more than $1 million. On its tax return, the estate valued Lockett’s 100% ownership interest in Mariposa at $667,000 after applying control and marketability discounts.

Nevertheless, the court found that Mariposa was a valid partnership. Although the sons didn’t hold interests in it, Trust A contributed assets and was therefore a limited partner, satisfying the requirement of an association of two or more persons.

The court also found no requirement that an Arizona business engage in a certain level of economic activity. Moreover, it determined that Mariposa was operated to derive a profit. The partnership hired a financial advisor to manage its stock portfolio, purchased real estate that it leased and made loans requiring annual interest payments. It thus operated as a business for profit.

Unfortunately for the estate, the IRS had an alternative argument. Even though a valid partnership was formed, it had terminated at the time of Lockett’s death because she had acquired 100% of the interest in it. This occurred when Trust A was terminated in May 2003 (effective Dec. 31, 2002). At that point, Lockett had become the owner of Trust A’s limited partnership interest in Mariposa as well as being its sole partner.

Arizona law provides that a partnership is dissolved when a dissolution event previously agreed upon in the partnership agreement occurs. The Mariposa agreement established that the FLP would be dissolved when one partner acquired all of the other partners’ interests. So on Dec. 31, 2002, Mariposa dissolved and Lockett became the legal owner of its assets.

Because the FLP had dissolved by the time of Lockett’s death, its assets were included in her gross taxable estate. If her sons had made contributions to fund their general partnership interests or she had gifted them with small interests in Mariposa, the FLP may well have withstood scrutiny and removed the assets from the estate.

Lockett’s mistakes were only a few of the many errors that can sabotage an FLP. To protect your clients from IRS attack, work with financial experts when drafting partnership agreements and making estate plans. 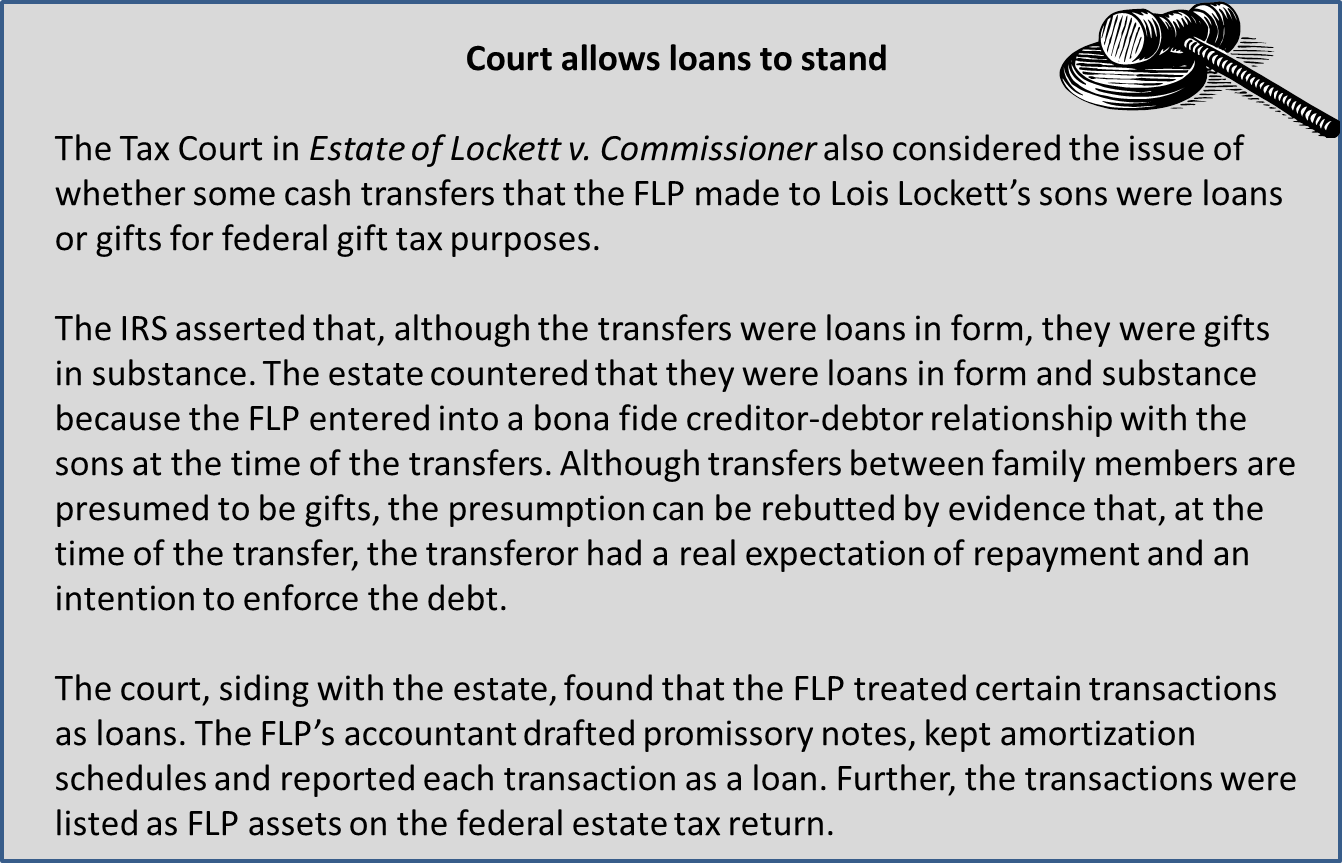