As you might know, the Financial Accounting Standards Board (FASB) has talked about easing its rules for small private firms for years. Fortunately, FASB recently proposed some revisions to Generally Accepted Accounting Principles (GAAP) to accommodate the needs of private businesses and their stakeholders.

These proposals may have an impact on the asset based lending industry. 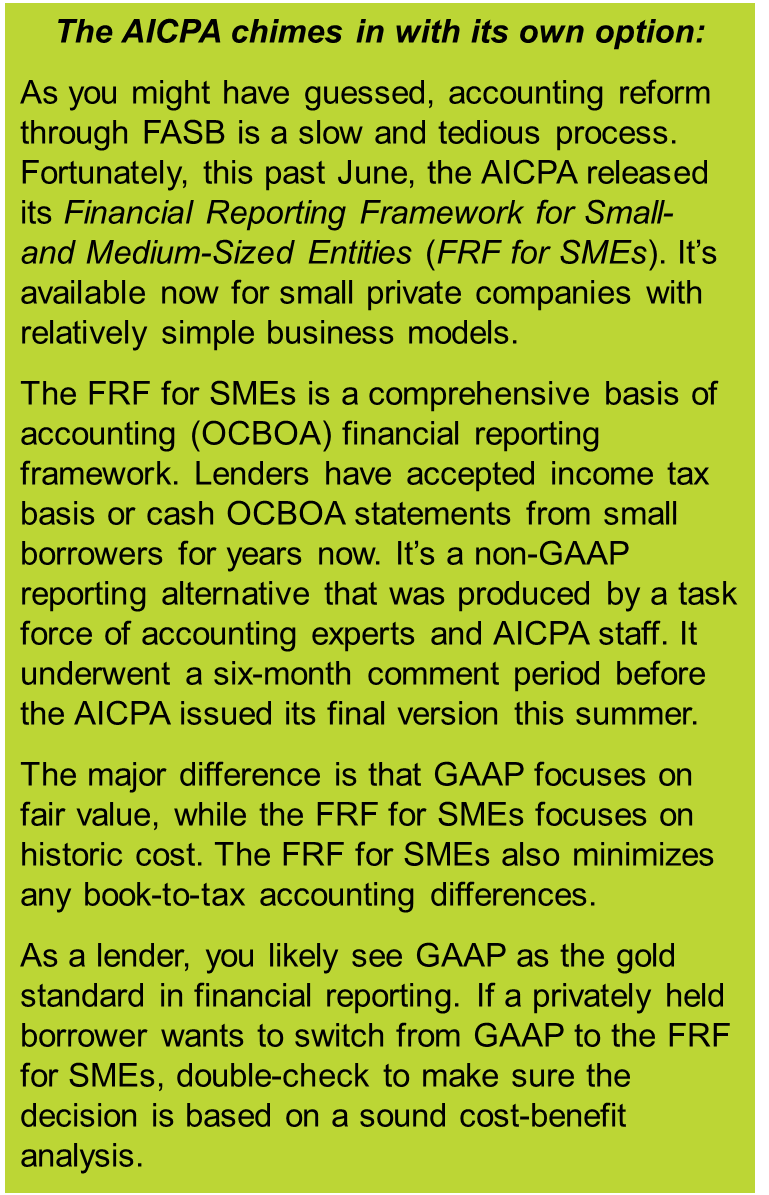 The current GAAP requires that companies recognize intangible assets acquired in business combinations at their fair value on the acquisition date. These intangibles need to be reported as separate line items if they meet either the contractual-legal criteria or the separable criteria.

As you may know, goodwill is the residual intangible asset that’s recognized in a business combination after recognizing all other identifiable assets and liabilities assumed. As of now, GAAP requires businesses to record goodwill at its fair value on the acquisition date. Then it’s tested each year for impairment at the reporting unit level.

The reporting units may be based on product lines or geography. It may be necessary to employ interim impairment testing if a triggering event, such as the loss of a major customer or discontinued product line, takes place. Impairment occurs when the fair value of a reporting unit’s goodwill falls below its book value.

FASB proposes that private businesses amortize goodwill on a straight-line basis over a useful life of no more than 10 years. Private companies would test for goodwill impairment only when a triggering event occurs. The proposal simplifies impairment testing to apply at the entity level, not at the reporting unit level.

Under these proposed changes, private businesses would make fewer and less complicated computations to report goodwill in business combinations. Thus, goodwill would receive similar treatment as other finite-lived intangible assets, such as patents and copyrights.

Generally speaking, GAAP requires businesses to use complex hedge accounting techniques to report interest rate swaps at fair value. Or they can measure debt at its amortized cost and make swaps separately at fair value. But, both methods can create income statement volatility over the life of the swap.

With the combined instrument approach, qualifying interest rate swaps aren’t reported separately on the balance sheet. There is an exception for periodic accruals from interest rate settlements, however.

In the aftermath of the Enron scandal, FASB required consolidation of variable interest entities with their parent companies in order to prevent management from using them to disguise lackluster performance or fraud.

Consolidation has, indeed, been burdensome for small business owners who own buildings personally and then lease them to their companies. Under this proposal, private firms wouldn’t need to consolidate results from a lessor entity if they have a formal lease agreement, are under common control and substantially all of their interactions relate to leasing activities. The proposal, however, would require detailed disclosures of the leasing arrangements.

The debate rages on

This fall, FASB and the Private Company Council are supposed to discuss the comments received on the four proposals mentioned above. Keep your eyes and ears open for news later this year on whether FASB will enact the changes and when they’ll become effective.

Freed Maxick’s Asset Based Lending Team works with dozens of asset based lenders across the country. Contact us for any questions or concerns you may have on wither the FASB or AICPA proposals.

For more information about our business advisory, audit, and other accounting services contact us here, or call me at 716-847-2651.