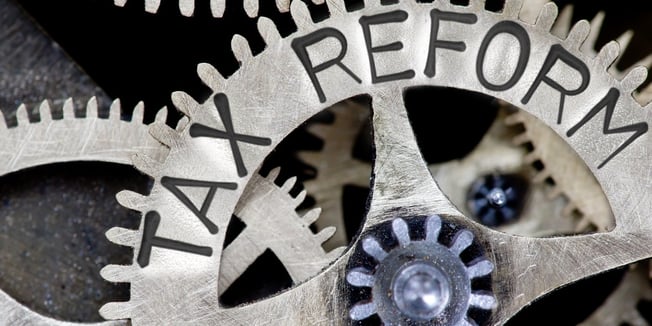 When evaluating the state impact of the new tax reform, there’s a few things to consider:
How does the state interpret the Internal Revenue Code (IRC)?


States utilizing a rolling conformity will automatically see changes to the starting point in calculating the state taxable base. Will more states look to decouple from federal based on the tax reform?

Only time will tell.

As part of the reduction of the corporate and flow-through tax rates, some deductions and items have been repealed or eliminated which could broaden the tax base on a federal and state tax level. With states struggling to reduce their budget deficits, it’s unlikely that rate reductions at a state and local level will occur. That being said, the state income tax rate will become increasingly meaningful and material to a company’s overall effective tax rate. State tax planning, mergers and acquisitions, and capital investments should also become more significant at the state level going forward based on which states will provide more advantageous modifications and lower tax rates.

The new act provides for an immediate 100% deduction for qualified new and used property until January 1, 2023. A majority of states require an addition to income adjustment to the state taxable base for IRC Section 168(k) bonus depreciation. Therefore, a business could see a higher depreciation addition to the state tax base depending on the amount of qualified property expensed under the provision for federal purposes.

It will be interesting to see if the handful of states that currently don’t require an adjustment change course and decouple from this provision.

The new tax bill generally allows a deduction for net interest expense up to 30% of the business’s adjusted taxable base. Any disallowed portion in most cases may be carried forward indefinitely. This could increase a company’s state tax base for those following and adopting this federal provision.

Will all or some states allow a carryforward for any unused portion of interest expense? A company filing in separate reporting states could result in a harmful tax consequence if the stand-alone entity has low income and high interest expense on the books.

Transition to a Territorial Tax

The sweeping federal tax reform impacts foreign income and ownership. Previously, foreign income earned by a foreign Controlled Foreign Corporation (CFC) owned by a U.S. corporation generally would not be taxed until the income was distributed as a dividend (exceptions with Subpart F and Sec. 956 inclusion). As part of the transition to a “territorial tax”, the new tax bill will require a deemed repatriation on previously non taxed post 1986 historical Earnings & Profits (E&P) of a foreign subsidiary. A portion of the pro-rata share of foreign earnings is deductible.

One could expect to see widespread differences among states on how the deemed repatriation will be taxed. For states with a rolling conformity and those that conform to the new provision, the repatriation could increase the state tax base if only a portion of the earnings are deductible. Some states may have specific language as to what type of foreign income can be excluded from state income. For states that take longer to adopt IRC provisions, it is quite possible the one-time deemed repatriation may never appear in the state taxable base.

The impact of the new plan on state taxation of businesses will likely not be fully realized for several years. With the state’s primary goal to increase tax revenues, it will be interesting to see what action is taken and how each state will interpret the new federal tax provisions.

As such, state tax level considerations should be a primary focal point moving forward for companies looking to spend and grow their operations in the U.S.

If you have any questions or concerns on how the federal tax reform may impact your company on a state or local level, contact our State and Local Tax team by clicking here or calling 716-847-2651 to get in touch with a member of the Freed Maxick SALT Team for a no cost consultation.